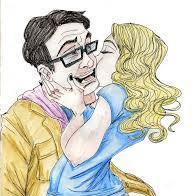 To quote Penny again:- HOLY CRAP ON A CRACKER!   Looks like my latest one-shot, has just become AU.

I think they will get engaged in Ep 9.11, mainly because of the guest cast of WW and PP, but also because I don't think Sheldon is going to wait to propose.   He already knows he wants Amy as his wife

A kitty sticker that says: me-wow?